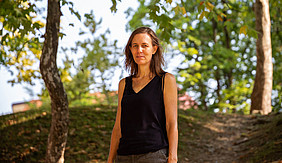 This talk connects different aspects of my research on gender and politics in Bosnia-Herzegovina (BiH) since the 1990s, bringing out continuities in the ways in which gender has figured into various political expressions. Starting with the gendering of ethnonational belonging after the violence of the 1992-5 war, I focus on dominant representations of gender and collective victimhood and attempts to bring awareness of women’s rights and gender equality into public discourse, particularly in areas dominated by Bosniak (Bosnian Muslim) politics. I trace the evolution of gender activism from humanitarian responses through NGOization to autonomous critical collectives, reflecting on the role of gender in local responses to the more recent influx of irregular migrants and refugees crossing into the territory of BiH with the hope of continuing over the border into the EU. I argue that the unfinished feminist critique of nationalism from the immediate postwar period has allowed for a common-sense understanding of migration through the same patriarchal and Eurocentric lens that has shaped the logic of gendered war violence and postwar marginalizations over the past thirty years.

Elissa Helms is a socio-cultural anthropologist and Associate Professor at the Department of Gender Studies at the Central European University, Vienna. Her older work focuses on nationalism, gender, and activism in Bosnia-Herzegovina and the rest of former Yugoslavia, while more recent research focuses on borders, race, European belonging, and local responses in BosniaHerzegovina to Balkan Route migration to the EU. In addition to her journal articles and book chapters, she is the author of Innocence and Victimhood: Gender, Nationalism, and Women’s Activism in Postwar Bosnia-Herzegovina (U of Wisconsin Press, 2013) and co-editor, with Xavier Bougarel and Ger Duijzings, of The New Bosnian Mosaic: Memories, Identities, and Moral Claims in a Postwar Society (Ashgate, 2007). A new volume co-edited with Tuija Pulkkinen entitled Borders of Desire: Gender and Sexuality at the Eastern Borders of Europe is forthcoming with the University of Manchester Press