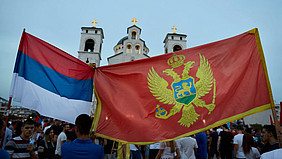 This research seeks to examine development of relations between Serbia and Montenegro in the post-referendum period by focusing on statehood and identity issues. The paper aims to investigate broken relations between two ‘fraternal countries’ during the post-referendum period by analyzing the problems of acceptance of Montenegrin identity by the Serbian state, elite and public. In addition, the paper seeks to analyze how the state responds to such subversive tendencies in order to preserve the achievements of Montenegrin statehood by using various populist mechanisms by dominant ruling party of the Democratic Party of Socialists. This research argues that Montenegrin political elites are not being successful in consolidating national identity as the national identification was slowed due to high exposure and responsiveness to external (Serbian) influences that have mobilized the public around this alternative national identity.

Take It or Leave It