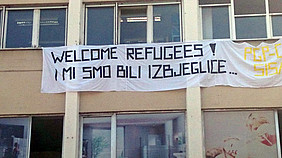 BB: Tamara Banjeglav - We Were Refugees ourselves! Border Discourses and Historical Narratives of the 1990s War in Debates about Refugee Crisis in Croatia

This research project investigates how memory of the 1990s war and the experience of being refugees features in Croatian public debates about today's situation with refugees in Europe and what kind of dichotomies these debates produce. Specifically, the project examines how self-perception of a receiving community, including its own memories of migratory events, influences the way in which the community responds to people crossing borders. It also examines how refugees serve in the identity construction of the receiving community. In this context, the research pays particular attention to how refugees are othered by different mechanisms and whether these mediated public discourses produce a new discursive category of 'refugees like us'. The project is theoretically grounded at the intersection between memory studies and migration studies.

Tamara Banjeglav is an independent researcher and currently a research fellow in the Field of Excellence “Dimensions of Europeanization”. She gained her MA degree in Nationalism Studies from Central European University in Budapest and her PhD degree from the University of Graz, Austria. After having received her PhD degree, she was a post-doctoral visiting fellow at the Department of History, University of Sarajevo, and a research and teaching fellow at the Department of Cultural Studies, University of Rijeka. She was also engaged as a researcher on the project “Framing the Nation and Collective Identity in Croatia: Political Rituals and the Cultural Memory of Twentieth Century Traumas (FRAMNAT)“. Her research interests fall within the fields of memory studies, transitional justice, nationalism studies, and migration studies, particularly in the post-Yugoslav space.